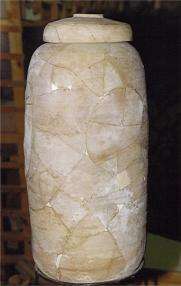 What is the significance of Biblical archaeology?

Archaeology cannot prove every word of the Bible but it demonstrates from the thousands of discoveries that the Bible is trustworthy. For many years skeptics had been claiming that King David was a myth until recently was found a limestone stele with writing that speaks of David and his kingdom. “Conversely,’ said Geisler, ‘if we can trust the Bible when it’s telling us about straightforward earthly things that can be verified, then we can trust it in areas where we can’t directly verify it in an empirical way.'” The Case for Faith, Lee Strobel p. 128

How do we know that biblical prophecies were not written after Christ lived and made to fit His life? The Dead Sea Scrolls answers that objection. The scrolls include two copies of the book of Isaiah; one copy is complete. Major portions of prophecy about the Messiah are found in the Old Testament book of Isaiah. These Isaiah scrolls were originally written between 740-680 B.C. and the Isaiah Dead Sea Scroll copies are dated to about 250 years before Christ. So here we have copies of Isaiah dating over 200 years before Christ! Some may ask, “so what?” Well skeptics can no longer say that these verses were written after Christ to make it look divinely inspired. No, the proof is available for anyone to see that only God, who knows the future, could have superintended the biblical authors who penned them.

Unfortunately our public schools have dismissed the Bible as a book of “religion” and myth. In reality the Bible is an accurate book of early history, demonstrated by archaeology, as well as being a book of wisdom, knowledge of God and humankind. If the Bible was a book of myths archaeology would have proven it so. “There have been thousands-not hundreds-of archeological finds in the Middle East that support the picture presented in the biblical record . . .

Even small details have been collaborated, like which way the wind blows, how deep the water is a certain distance from shore, what kind of disease a particular island had, the names of local officials, and so forth.” The Case for Faith Lee Strobel p.128, 129

Another factor for the tremendous significance of the Dead Sea Scrolls was how they essentially proved that the Bible has been accurately copied over many hundreds of years. “Once a comparison was made between the text of the Isaiah Scroll and the Masoretic Text, it was evident that, except for minor details (such as spelling) that do not affect the meaning of the text, the two were almost identical. Even though the Qumran text was more than six centuries older than the Masoreties . . . it confirmed the accuracy with which the scribes had carefully preserved and transmitted the biblical text through time.” Secrets of the Dead Sea Scrolls Dr. Randall Price P. 127

Observe these examples of Messianic prophecies from  Isaiah of which we have copies more than 200 years before Christ.. Isaiah 53:5 “But He was pierced through for our transgressions, He was crushed for our iniquities; the chastening for well-being fell upon Him, And by His scourging we are healed.” Jesus was pierced after He died on the cross. The Romans did this to verify that he was dead. He was scourged (whipped) just prior to the crucifixion.

Other prophecies say He would be born of a virgin Isaiah 7:14; born from the family of Jesse, who was the father of King David Isaiah 11:1&10; that He would be preceded by a messenger as John the Baptist preceded Jesus Isaiah 40:3; that He would perform many miracles including healing the blind, deaf and lame Isaiah 35:5,6; that He would be killed with transgressors as He was crucified with thieves Isaiah 53:12; and very specifically that He would be buried in a rich man’s tomb as Jesus was buried in the tomb of Joseph of Arimathea, Isaiah 53:9 and Matthew 27:57-60.

These things were written about 500 B.C. They are very specific and Jesus fulfilled these and many more prophecies from other books of the Bible.
For more in depth content about archaeology and prophecy purchase the interactive multimedia CD-ROM called Evidence the Bible is True. To order the program click HERE.