Can Intelligent Design be Falsified?

Evolutionists claim that Intelligent Design (ID) does not have hypotheses that are falsifiable. They then conclude that ID is pseudoscience. This is a very serious claim, and it is prolific in the pro-evolutionary media as a foundational argument against ID.

Does ID have falsifiable hypotheses? Yes, and they correspond to the evolutionary falsifiable hypotheses. For example, Charles Darwin wrote in the Origin of Species, “If it could be demonstrated that any complex organ existed which could not possibly have been formed by numerous, successive, slight modifications, my theory would absolutely break down.” Therefore, if it could be shown that an organism could not evolve by numerous, successive, slight modifications, it would reveal Darwin’s theory to be false. Note: Natural selection is an effective theory for explaining biological change within a kind; thus natural selection is not being challenged here. However, the following demonstrates that evolution theory is false.

Michael Behe, the author of Darwin’s Black Box, coined the term irreducible complexity. It describes systems which have no functional advantage unless several components are in place. Behe used the analogy of a mouse trap. In order for the mouse trap to catch mice it must have all five components: a platform, hammer, spring, sensitive catch and bar. Behe uses several biological examples including the bacterial flagellum, blood clotting and cilia for illustrating irreducibly complexity. Evolutionists go through extraordinary mental contortions in lengthy articles trying to explain away the problem of irreducibly complexity in these examples. They provide no empirical evidence to support their imaginative views, while leaving horrendous gaps along the way in their “just so” stories.

So, if in fact ID is just nonsense and does not provide falsifiable hypotheses, then why do evolutionists go through such extraordinary lengths trying to explain away examples of irreducibly complexity? The fact that they have lengthy articles designed to dispute irreducible complexity only demonstrates that it is falsifiable.

An irreducibly complex hypothesis can be stated falsifiable: “Are there irreducibly complex biological systems which would refute numerous-successive-slight-modifications evolution?” This is a testable hypothesis; evidence on both sides has been presented. It is incorrect to say that ID is pseudoscience and does not provide falsifiable hypotheses.

The cell is the ultimate example of irreducible complexity. My book Evolution Shot Full of Holes with co-author Frank Sherwin, contains a chapter on the topic of the origin of life. The cell is an interdependent functional city. We state, “The cell is the most detailed and concentrated organizational structure known to humanity. It is a lively microcosmic city, with factories for making building supplies, packaging centers for transporting the supplies, trucks that move the materials along highways, communication devices, hospitals for repairing injuries, a massive library of information, power stations providing usable energy, garbage removal, walls for protection and city gates for allowing certain materials to come and go from the cell.” The notion of the theoretical first cell arising by natural causes is a perfect example of irreducibly complexity. Life cannot exist without many numerous interdependent complex systems, each irreducibly complex on their own, working together to bring about a grand pageant for life to exist. 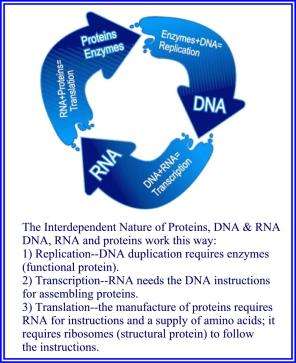 A specific example described in the book is the interdependence of DNA, RNA and protein. We summarize the issue, “DNA, RNA and proteins cannot do their jobs without the help of at least one of the other two. DNA is a library of detailed information for the various structures within the cell. It has the information for the manufacture of each protein. RNA is a copy of instructions from the DNA and is sent as a messenger to the ribosomes for making proteins. There are two types of proteins; functional proteins such as enzymes, and structural proteins, which compose the organelles. Living cells need all three molecules at the same time. The chance, simultaneous natural appearance of the three distinct, interdependent complex systems is just not possible.” Not only are these three needed for life, but an organism also needs a cell membrane, usable energy, reproduction and all left-handed amino acids. The cell itself is a tremendous and irrefutable example of irreducible complexity.

Considering the cell as being the ultimate irreducibly complex system, there is no conceivable way that life could arise by natural causes. Darwin’s theory of numerous, successive, slight modifications simply does not work when discussing the origin of life. The problem that irreducibly complexity brings to evolution is clearly daunting for evolutionists. Their way to deal with the problem is to dismiss it as nonscientific, pseudoscience or religion dressed in a tuxedo. However, when one looks at the issue of origin of life through the lens of irreducibly complexity, it simply brings one with a reasonable mind to his or her knees, admitting life cannot begin by natural causes.

Evolution is a belief system. For an evolutionist to agree that life cannot begin by natural causes is anathema to such a belief system. Meanwhile the public continues to be indoctrinated into the belief that ID is not science. However, there is hope. As a testimony to the power of ID education, the ardent atheist Anthony Flew has given up atheism and has come to believe that there must be an Intelligent Designer.