Does order come out of chaos?

The first sentence of Carl Sagan’s book, COSMOS, states, “The cosmos is all that is or ever was or ever will be.”[1] In fact, this was a trademark statement for him–he made the same statement in his opening lines in the COSMOS[2] documentary series by NOVA. In Sagan’s view, “The cosmos is all there is…” means there is only matter and energy in the universe. There is no God and there is no intelligent design to the universe. If he is correct, then where did information come from?

Stephen C. Meyer of the Discovery Institute explains the nature of information in a video clip, “Extras,” from the Unlocking the Mystery of Life DVD.[3]  Meyer describes teaching his students about information by holding up two computer disks. One disk is blank while the other is full of information. He asks, “What’s the difference in mass between these two computer disks, as a result of the difference in the information content that they possess?” The answer is a resounding, “Zero, zilch, nada,” because information is as Meyer says, “a massless quantity”. Meyer then concludes, ” Now if information is not a material entity, then how can any materialistic explanation explain its origin?” Therefore, if a material or natural cause cannot explain the origin of information then all that is left is a supernatural cause. But what is information?

If one was to happen upon a sign that says, “Do Not Enter”, no one would wonder if the information from the sign might have arrived by natural causes. Also, if while walking on the beach one sees a large heart with the words, “I love you” written in the center of it, the observer would never conclude that those words had been formed by waves, wind or some other natural source. Any time we see information, we know that it comes from an intelligent source. What about the information found in DNA? 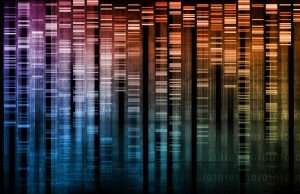 Deoxyribonucleic acid is a set of assembly instructions for the rest of the cell, organism or being. Dr. Warner Gitt, the author of In the Beginning Was Information writes, “DNA molecules contain the highest-known packing density of information. This exceedingly brilliant storage method reaches the limit of the physically possible, namely down to the level of single molecules.”[4] Therefore, biological information provides the most complex and dense information known. In addition, Richard Dawkins, in The Blind Watchmaker writes, “There is enough storage capacity in the DNA of a single lily seed or a single salamander sperm to store the Encyclopedia Britannica 60 times over.”[5] We see that DNA is not a concatenation of random letters, but is ordered, complex, dense and contains a huge volume of information.

Gitt provides a detailed look at information, dividing it into five levels. Wherever information is found, it fits these five levels. These can be illustrated with a STOP sign. The first level, statistics, tells us the STOP sign is one word and has four letters. The second level, syntax, requires the information to fall within the rules of grammar such as correct spelling, word and sentence usage. The word STOP is spelled correctly. The third level, semantics, provides meaning and implications. The STOP sign means that when we walk or drive and approach the sign we are to stop moving, look for traffic and proceed when it is safe. The fourth level, pragmatics, is the application of the coded message. It is not enough to simply recognize the word STOP and understand what it means; we must actually stop when we approach the sign. The fifth level, apobetics, is the overall purpose of the message. The STOP signs are placed by our local government to provide safety and traffic control. The code in DNA completely conforms to all five of these levels of information.

DNA is made up of a code of 4 letters (statistics). The four DNA letters, like the 26 letters of the English alphabet, are arranged into a code (syntax). The DNA code is a form of language that communicates with RNA (semantics). Not only are instructions communicated, but they are carried out in the cell, creating various organelles (pragmatics). The DNA provides the instructions to build the various organelles in order to maintain the cell (apobetics). This brief summary of Gitt’s five levels demonstrates the depth of the information in DNA as being dependent upon an intelligent source.

If Sagan was alive today and was challenged with the information argument, he would probably give a response like, “Scientists have not discovered the answers to ultimate questions, but given time they will.” This is what one of my readers says to the ultimate irreducible complexity argument.