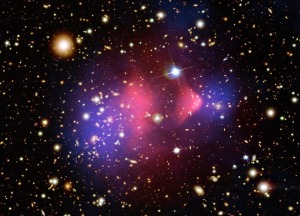 One person responded to my comments with several paragraphs including the statement, “Here’s a clue: the universe is chaotic and the formula is valid.” I wrote back claiming that Carl Sagan would disagree with that statement and quoted from a humanist web site which states, “Sagan also pointed out numerous times that ‘the order of the Universe is not an assumption; it is an observed fact’. And that the simplest definition of science is the search for rules — which is, in turn, the only possible way to understand our vast and complex Universe. Sagan admitted that ‘human beings are, understandably, highly motivated to find regularities, natural laws…’ The Universe forces those who live in it to understand it. Those creatures who find everyday experience a muddled jumble of events with no predictability, no regularity, are in grave peril. The Universe belongs to those who, at least to some degree, have figured it out'”.[2]

For Sagan the universe displaying order was a big deal to him evidenced by naming his book and video series Cosmos. Sagan wrote, “Cosmos is a Greek word for the order of the universe. It is, in a way, the opposite of chaos. It implies the deep interconnectedness of all things. It conveys awe for the intricate and subtle way in which the universe is put together.”[3] Evidence for order is observed in mathematics, physics, and likely every field of science.

Order in the universe leads us to ask, who or what ordered the universe, God or nothing. Evolutionists are forced by their a priori commitment to “. . . a set of concepts that produce material explanations, no matter how counter-intuitive.” [4] However, order does not come from nothing. It comes from an organizer with intelligence. So should Intelligent Design be disqualified as scientific simply because the obvious conclusion of universal order is God instead of nothing? No! Should the “God cause” be marginalized as religious while the “nothing cause” is given the scientific seal of approval? No! Either both are scientific possibilities or neither is, so let’s act consistently while educating our youth.

It is no wonder that most people still view God as the source of their being. When an average person looks at the arguments in favor of creation, he or she quickly concludes that creation arguments are logical and persuasive. It is both scientific and commonsense to realize that organization requires an organizer, design requires a designer and information as in DNA requires an author. Evolutionists are acting like the swindlers in the proverbial Emperor’s New Clothes. Most Americans are not buying the illogical-unscientific idea that order, design and intelligence came from nothing but time and chance.